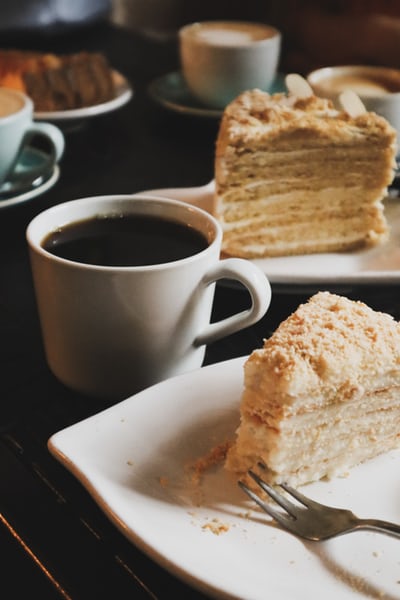 It is a truth universally acknowledged that money follows vision. (I apologize to Jane Austen)
Thus an important role for the minister is to constantly share the vision of the church in as many ways as possible. One way that I found particularly enjoyable was in the form of dessert and coffee evenings.
When I first became senior minister (Rector) of the Anglican parish of Figtree in 1987, my wife Helen and I invited groups of people to our home (rectory) for ‘get to know you events’ designed to make contact with members of our new parish family. The prime purpose of these gatherings was a good one: fellowship. I continued to hold such events as the years went on but their focus broadened to include sharing the vision.
I was asked recently just exactly what we did. I briefly referred to this concept in my book Giving Generously but I elaborate more fully here.  It is not particularly rocket science and I am sure there can be many variants but our evenings generally took the following course.
The People
First Helen would mail out invitations from names I would give her. Generally we would try to invite about 16 people, normally 7 couples and two singles. The singles were not invited for any match making purposes but simply to invite them as I was advised that married people often unconsciously exclude singles. There was no magic in the number 16. It was just the approximate limit to our lounge room and I always reckoned that not everyone would be able to accept.
While I certainly invited people from all areas of parish life I tried to include mostly the people who were contributing significantly to the health, vitality and progress of the ministry with their time talents or treasure. Is this being selective? Yes! But the simple fact was that the parish had around two thousand people on the contact list. I would have liked to invite everyone and certainly tried to connect with as many as possible in other ways. However, in these evenings (almost always on a Friday), I wished to purposefully speak into the lives of people who were contributing most to the progress of the parish.
The Evening
Second, when people arrived, they were welcomed into the lounge room of our home. I always believed the home venue was important. Of course we did have different types of functions in other venues such as the church or a restaurant but inviting people into your home is an important pastoral function that provides a real connection.
The evening was broken into three parts. The first, at 7:30pm, would be some sort of getting to know you game. We often found that asking couples how they came to meet was an excellent discussion prompter as it often lead to many funny stories. There are endless variants that could be used, such as ‘tell us about your favourite movie and why?’ While some of the group may have known each other for years, such questions often give new insights even to old friends.
Then, at 8:30pm we would break for supper with tea, coffee and an assorted array of really nice cakes and goodies, some of which we purchased from a local cake shop and some Helen cooked herself. I was really blessed that in Helen, I had a wonderful hostess who could not only provide and present the food beautifully but socially oiled the evening so people really felt welcomed. This took a huge amount of pressure off me as I am an introvert, for whom social occasions are not my long suit, even though I see them as vital.

At about 9pm after supper, we would reassemble in the lounge. There I would say something like, ‘I would like to share with you where I see the church going over the next few years. Nothing is set in concrete at this stage. It has not been signed off in any detail by the parish council. But these are the sorts of things that on my heart. I would just like to talk about them and get your feedback.’

Then I would give an overview of the ministries we would like to start, the staff members we would need to support them, the buildings we might need to house them. I would encourage the room to ask questions, seek clarification and challenge the assumptions. Sometimes people would want to know why certain past decisions had been made. Other times a group member might make a really good suggestion which I endeavoured to act on later and acknowledge when it came to pass.But overall I wanted to let people know that the church was not on autopilot and that the leadership were actively thinking planning and praying about our future.

At 10 pm promptly I would thank them, pray for them and conclude the evening as I did not want them to feel they were stuck till the wee hours.

Could these evenings have been for dinner? Helen and I certainly had people over for meals on many occasions but for these particular evenings we preferred dessert and coffee. Over dessert and coffee you can invite more people and they are far easier to host and maintain. Remember the purpose of the evenings is to have a friendly relational way to speak into the lives of as many people as possible and to keep doing so over many years. It is often the persistence with a ministry like this that ultimately makes it effective.
All it needs is a bit of Sense and Sensitivity and the evening is a wonderful form of low key Persuasion. I am sure Jane would agree.

See also the article The Importance of Vision