A generous person will prosper;  whoever refreshes others will be refreshed. Prov 11:25

Now maybe you are thinking, that’s crazy. How can giving stuff away be a good thing? How could that be a bright idea? Won’t that diminish me? If you are thinking that you are in very good company. However it a biblical truth and it is a universal truth. It is also found in the writings of sages, philosophers, wise men and women and religions throughout the ages.

There is a recent secular book called ‘The Paradox of Generosity: Giving we receive, Grasping we lose’, by Christian Smith and Hilary Davidson. 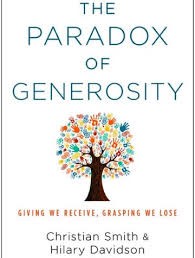 Smith leads the Science of Generosity Initiative at the University of Notre Dame in the U.S and Davidson has close involvement in the work. The study draws attention to the paradoxical, counter-intuitive nature of generosity. Here is the essence of it:

‘Generosity is paradoxical. Those who give, receive back in turn. By spending ourselves for others’ well-being, we enhance our own. In letting go of some of what we own, we better secure our own lives. By giving ourselves away, we ourselves move toward greater flourishing. This is not only a philosophical or religious teaching, it is a sociological fact.’

This is a book worth buying. It is based on two thousand surveys followed up with sixty focussed interviews with real people, Americans, some generous and some and some self admittedly far less so.

They examined generosity over five dimensions.

A life of generosity is a life where you are a giver not a taker, you are open-hearted with an open wallet. The result: generous people were happier, healthier, had more purpose in life, more friends, less depression, more opportunities and experienced more personal growth. And what’s more, the relationship of generosity with blessings was causal. Generosity was not just associated with blessing; it actually caused it. This point, being controversial, was examined in some detail.

The authors stress that the positive effects of generosity flow to those who value generosity and make it a habit of life. Making a one-off gift in some emergency, performing some incidental community service like giving blood on occasion just doesn’t cut it. The blessing of generosity accumulates to those who have internalized generosity so it is part of their DNA. Consequently it cannot be faked and does not accrue to those who give in order to get or to acquire some perceived advantage. Generosity is more like love: the more you give it away the more abundant it becomes.

They also examined the effect in the negative: the effect of lack of generosity on those who kept things for themselves.

The ultimate opposite is the miser. I certainly don’t want to be thought a miser. The miser hoards, grasps, doesn’t give, doesn’t share. Misers are not just careful with money but tight, skinflint, cheapskate. The miser is not happy.  Our word ‘miserable’ and the word ‘miser’ have the same basic meaning. They both come from the Latin root that means ‘wretched’.

The Paradox of Generosity study found that generous people were happier, healthier, had more friends, enjoyed more benefits, were more prosperous, thrived in life. The ungenerous ones were poorer in spirit and often financially, had less purpose, lived for themselves, were sicker and lonelier.

Jesus  said’ It is more blessed to give than to receive’ and it is obvious he knew what he was talking about.

So here is my point from the scripture, tradition and reinforced by modern sociology

Be generous. It’s good for you. It will give you great joy. It will bless others and the bible adds that it will give God glory (2 Cor 9:11).