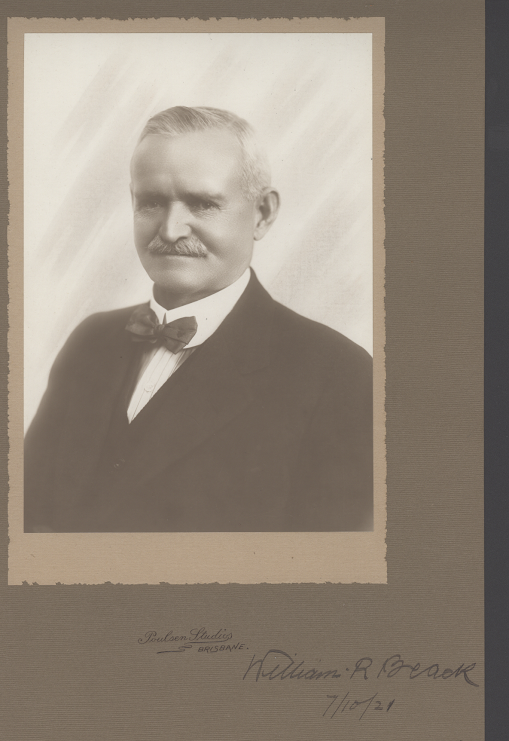 At the back of the St Andrews Uniting Church in Brisbane CBD there is a stained glass window to the memory of a forgotten gospel patron, William Robert Black. Gospel Patrons is the name of a very helpful book by John Rinehard and tells the story of the little known philanthropists who financially supported seminal Christian leaders like Matthew Tyndale, George Whitfield and John Newton.

William Robert Black was one of Queensland’s greatest philanthropists long before philanthropy became an academic discipline. He was born in County Tyrone, Northern Ireland in 1859, the son of Robert Black a farmer. From his family who were touched by the 1859 revival, he absorbed both his capacity for hard work and his devotion to Christ. He emigrated to Maryborough in 1880 where he worked as a timber getter and fencer.

In 1885 he moved to Brisbane, initially working for a coal merchant, he soon was selling coal from his own cart. Within fifteen months he had multiplied his business to become a coal merchant himself and to have fifteen horses and drays working for him. Black later entered the Brisbane River trade and bought lighters and launches which enabled him to source coal direct from the Ipswich coal fields. He sought and won interstate sales for Queensland coal and vigorously sought overseas markets at a time when Queensland coal was not highly regarded.

To secure supply he entered into a number of contracts and joint ventures with colliery owners. By 1902 he decided to further strengthen his supply chain by becoming a colliery owner himself with mines at North, South and West Ipswich. By 1908 Black’s mines were supplying one third of Queensland’s coal a figure that increased in the coming years.  He operated his mines by setting strategic direction and delegating responsibility to highly skilled and trusted managers. Further he invested in cutting edge technology to make his mines extremely productive and profitable.

In 1920 he sold his businesses and retired. He had always been philanthropic but he devoted the rest of his life to actively supporting charitable causes that are almost too numerous to mention. However they include, Homes for orphan boys and girls, Home for the Aged, support for a deaconess to work among distressed women in Spring Hill, the Mission to Lepers. He was on the board of Somerville House Girls School and his money was significant in the founding of Fairholme School in Toowoomba, Brisbane Boys College in Brisbane and a school in Charters Towers. He was an active member of the Presbyterian Church and gave to the support of St Paul’s Spring Hill, St Andrew’s Ann St, Brisbane and many other churches including the Jersey Church in the Channel Islands and his home Church, Orritor Presbyterian in Ireland.

He had an active interest in the temperance movement, a very significant Christian cause at that time, and gave a total of £41000 to the building of the Canberra Temperance Hotel in the Brisbane CBD.

Furthermore, as he was in business, his philanthropy was active and strategic. He would not merely hand out money but would often give on the basis that the recipients raise £1 and Black would give £1. He wished to encourage enterprise and initiative. He was widely respected and of outstanding character and motivated by his belief that he had been greatly blessed and his money was a sacred trust that must be used to bless others.

By the time of his somewhat unexpected death in 1930, he had given away approximately £150000. The terms of his will revealed again the strategic nature of his giving. After money left to family members, (Black never married) the remainder of the estate, approximately £180000 was placed in a trust fund for the Presbyterian Church to use in extending its ministry throughout Queensland. It was to accumulate compound interest for 21 years and when this time elapsed the trust total stood at £430000. It could then be used.

At Black’s graveside, the Rev J Gibson, a former Moderator General of the Presbyterian church of Australia, said:

‘No man in Queensland lived more simply and with less ostentation than Mr Black did, and the reproach that rich men did not give freely has been wiped out by the life and record of him whose body they are now consigning to the grave.’

Thus Australian Christian leaders who have a great gospel vision do not need to look merely to other countries and other centuries to find men and women of Christian commitment, vision and generosity. In William Robert Black there is a hero much closer to home. You can read more about encouraging generosity in the William Robert Blacks of your congregation in my book, Giving Generously. Buy The Book