It takes courage to raise money.

One of the major reasons that ministers don’t attempt to raise money for kingdom ministry is, to be frank, we are afraid to do it. Let me explain.

A couple of years ago while on holiday in the UK, I paid an unexpected visit to Carlyle Cathedral, unexpected because my wife and I had to detour through Carlyle to find an urgently needed dentist. In the crypt was an impressive display detailing the history of the Christian faith in the region over a period of around 1500 years.

I read there the story of a World War 1 Anglican chaplain, the Rev Theodore Bayley Hardy who amazingly won the Distinguished Service Order, the Military Cross, and the Victoria Cross for extreme gallantry on numerous different occasions, caring for and rescuing men under heavy fire. He was finally in action yet again and wounded and later died less than a month before the armistice in 1918. I was incredibly moved by his raw courage and emerged from the exhibit and said to my wife, ‘Now that’s my sort of Anglican clergyman’. 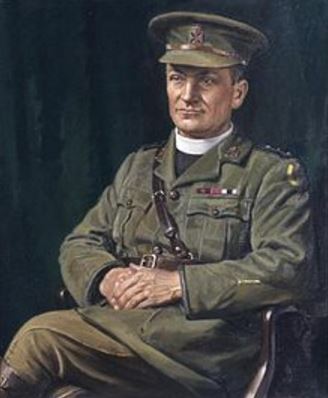 I am just so used to seeing television Anglican vicars, the sort invariably caricatured on Midsomer Murders, as weak and emasculated, unbelieving or fanatical, puritanical or lecherous. I just wished someone, somewhere would create a vicar who has some vague resemblance to Theodore Hardy. Maybe Mel Gibson could give it a go.

I stand in awe of people like Hardy. I think I would go to jelly in the type of situation in which he regularly found himself. Yet there is another sort of courage. In his book Path to Leadership Field Marshall Montgomery spoke of both physical and moral courage.

‘It is not given to everyone to have great physical courage … but we can all have moral courage, which to me means standing firm to what you believe to be right and giving a firm lead to others in that direction.’ p114.

There are some Christian leaders and believers who do need to show physical courage as they live out their faith in perilous places or under intimidating persecution. Average parish ministers are more likely to be called to exhibit moral courage in their preaching, leading or pastoral duties. One such area is the issue of raising money for ministry.

This is challenging because there is the risk of alienating people, losing friendships and looking like the worst kind of television preacher. There is the fear of people saying you are only ever asking for money. There is the possibility of looking totally uncomfortable and thus ineffective. There is the worry of being accused of feathering your own nest.

When I was first called to speak on giving. I was very apprehensive as I didn’t really know what to do and I was very uncertain on what to say or how the congregation would react. Sadly I believe that some clergy put it in the too hard basket.

The reason I wrote the book Giving Generously was to give pastors practical steps to raise money. But even when you know the practical steps it still takes moral courage to stand up in front of a congregation and ask clearly and graciously. I understand because I can certainly remember the knotted feeling that comes in the stomach. And yet after raising resources in a local church context for many years I can honestly say that if you ask graciously and with integrity, the outcome will not be congregational wrath but real joy that lives are being blessed as kingdom ministry is being funded.

So whenever I felt like wimping out I used to think, ‘Rod you are not being asked to be crucified like our Lord or whipped, shipwrecked, stoned or executed like St Paul or to go over the top at the Battle of the Somme. You are simply being asked to stand before God’s people and ask them to give to the greatest cause in the world. You can do this!’

And so can you.