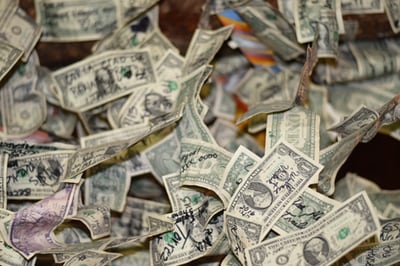 I have heard a preacher lament that most of his congregation were tippers rather than tithers. He meant of course that when it came to giving, he felt the people were giving the ‘loose change’ of their income rather than proactively and conscientiously planning to give a tithe, ten percent of their income,to God’s work. Certainly statistics of church giving seem to bear that out with somewhere about three percent being the average figure that is given. That minister obviously felt the ministry would financially flourish if the congregation had a tithing mentality rather than a tipping frame of mind.

I pondered this thought recently as I contemplated a trip to North America. Australia does not have a tipping culture and on my first trip some years earlier, I remember thinking it was outrageous that people, like waiters and porters, should get extra money just for doing their job. Since then,  with a little more wisdom and experience, I have modified my opinions. First it was explained to me that people in service industries are not well paid and the tipping culture of North America is the way that their remuneration can reach respectable levels. Second, the prospect of an excellent tip is a driver of above average service. I remember a waitress in Los Angeles fairly dancing attendance on our every need and explaining that she was in line for employee of the month with a big bonus and invited us to rate her highly, which we duly did. I generally receive reasonably good service in Australian restaurants but nothing like that provided by that lady.

Now I understand the system I don’t resent paying a tip anymore. The issue now is what is appropriate. Cafes and restaurants were not a problem as I gather that ten to 15 percent is an acceptable figure sometimes just automatically added to the bill. But it is porters, tour guides and cabbies that provide a puzzle. On one bus tour no one seemed to tip the guide, but on the next tour everyone seemed to be tipping.

As we were going on a cruise we booked a mini cab for six people to the cruise terminal. Thinking I had nearly mastered the system, I had the appropriate number of dollars ready for the driver. But I had forgotten the hotel porter who was hovering like a predatory eagle ready to move my bags two metres from the hotel entrance to the curb edge.

Then at the cruise terminal the driver unloaded our bags, received his tip, and I turned around expecting to pull my bag to find yet another porter and consequently another tip. Later in restaurants I found the EFTPOS machines required a number of stages before I could actually pay the bill. That included OK-ing the amount  Then I was directed to another screen where the tip percentage was nominated, and then finally I could pay. As I have said, I don’t resent tipping anymore but it takes a little time for a boy from down under to get used to it.

But what about being a tither or a tipper in church? I realised after giving my first restaurant tip, it was probably better to be a tipper than a tither. That was because a tithe is ten percent but that is a stingy tip. A generous tip is 15 percent or more. As someone who has written a book entitled Giving Generously I figured I ought to be a generous tipper.

So now if it is between tipping and tithing I am recommending, be a tipper, a generous tipper which will certainly exceed the tithe.