Almost Everything you want to know about Tithing

Almost everything you want to know about tithing

On Boxing Day 1891 The Age newspaper of Melbourne contained a report entitled A Ride to Little Tibet, about the exotic travels of Henry Lansdell D.D. In the story he was just leaving Kashgar, an ancient town on the old Silk Road, in the very west of China, to roam further on his journey. So who was Henry Lansdell and why would he feature in a massage on a generosity website?

Landsell was born in Kent in 1841, son of a school master. He was a student at the London College of Divinity and was ordained priest in the Church of England in 1868. A teetotaller, he gained a reputation as a dynamic preacher, which he combined with a passion for missions. Obviously he was bitten with the travel bug, and not having been tied down by the incumbency of a parish, began a roving existence visiting many countries and distributing bibles and Christian literature as he did so. Initially he visited France, Germany and other western European countries but soon embarked on multiple journeys. These included Northern and Eastern Europe, and through Asia to Japan and across the Pacific to San Francisco.

Further travel followed. He reported on the conditions in Russian prisons, visited Mt Ararat in Turkey, the traditional resting place of Noah’s Ark, and attempted, with the blessing of the Archbishop of Canterbury, to meet the Dalai Lama. It was this latter trip that drew the attention of The Age newspaper.  Lansdell saw sights and places that were completely off the beaten track to westerners of his time. He blended in with the locals and photographs show him in highly unusual local costumes, hardly the image of a prim Anglican clergyman that gets aired on historical television shows. His energetic labours were recognised as he was elected a fellow of the Royal Geographic Society, a life member of the British Association for the Advancement of Science and was member of the Royal Asiatic Society. Lansdell died in London in 1921, survived by his wife Mary.

During his journeys he made an exhaustive study of the practice of tithing throughout the regions he travelled, delving  into local practices and history. His findings are recorded in his book The Sacred Tenth or Studies in Tithe Giving, Ancient and Modern. It is a monumental work with detailed discussion of tithing in the Old Testament, Apocrypha, New Testament, Jewish Rabbinical practice, Early Church Fathers, and subsequent church history. Equally interesting is his survey of the subject in non-Christian nations from the Middle East to China.

I will give two examples among so many that attracted my attention. First, I was surprised at how wide spread the practice of tithing was in the ancient world with almost every society paying tithes in some shape of form.  I had always been somewhat puzzled that some of the early biblical references,-Abraham paying a tithe to Melchizedek (Gen 14:18-20),-Jacob vowing to tithe (Gen 28:20-22) or the command in Leviticus 27:30-33- are discussed  out of the blue as it were, without any introduction. This becomes understandable when you consider that the scripture is probably referencing a practice that was widespread common knowledge.

Second, I had not realized that when Henry  8th dissolved the monasteries,  around 1540 in England and parcelled out their lands to his aristocratic supporters, in many cases he also parcelled out the tithes to the new secular masters. I rather shared Lansdell’s indignation when I found that even at the end of the 19th century, 350 years later, around one third of those tithes were still flowing into secular aristocratic pockets for their own personal use and not assisting Christian ministry.

Lansdell was a supporter of the practice of tithing. I recognize this is controversial but whether you believe that the tithe should be preached today or not, your knowledge and viewpoint will be greatly enhanced by reading this book which is still available online or in paperback. If you want to read more about raising money for ministry read my book Giving Generously: resourcing local church ministry. https://givinggenerously.com/ 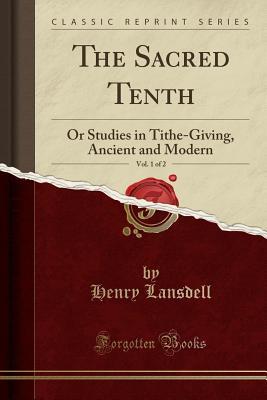